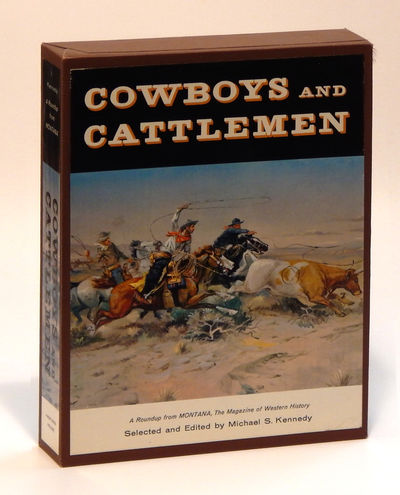 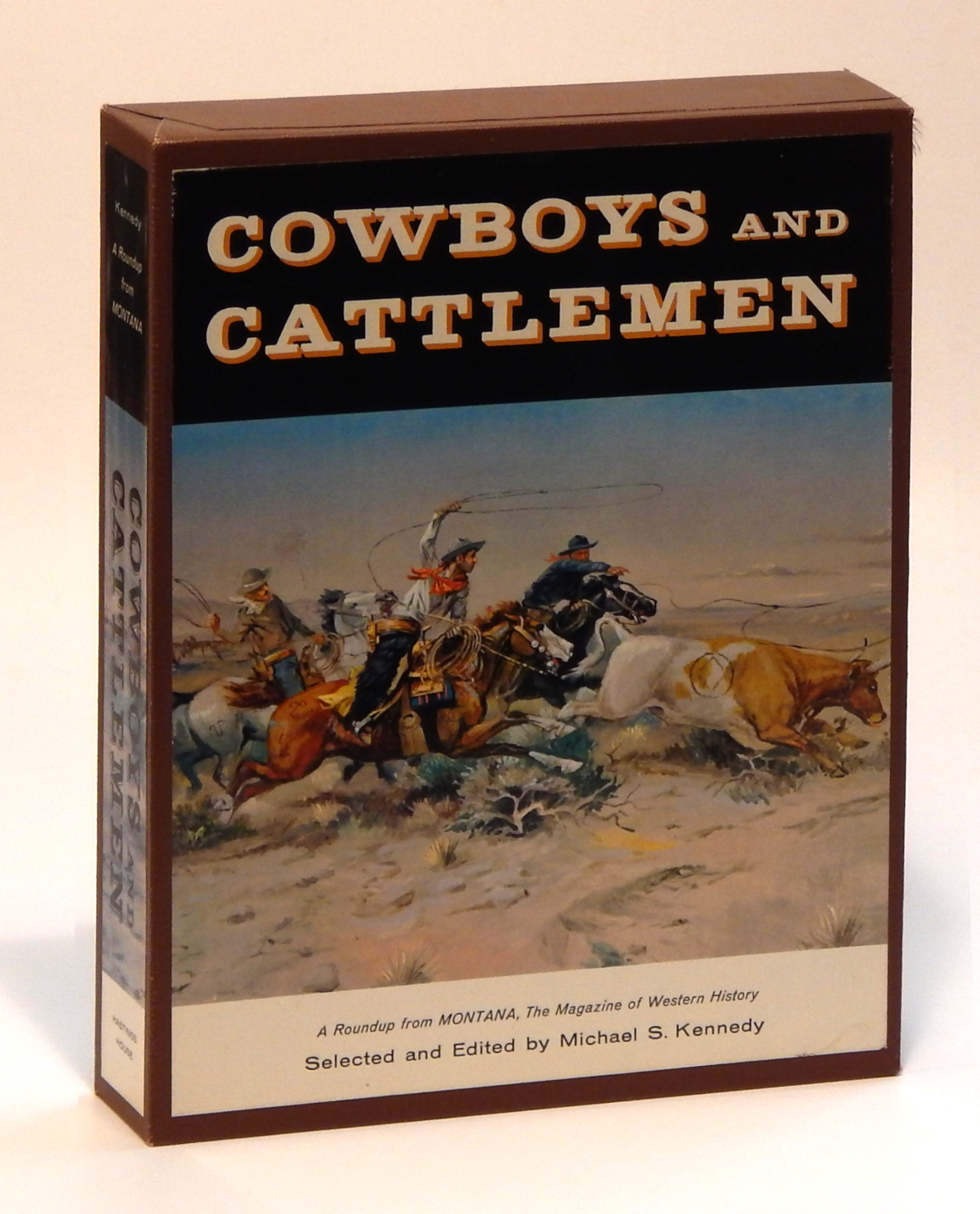 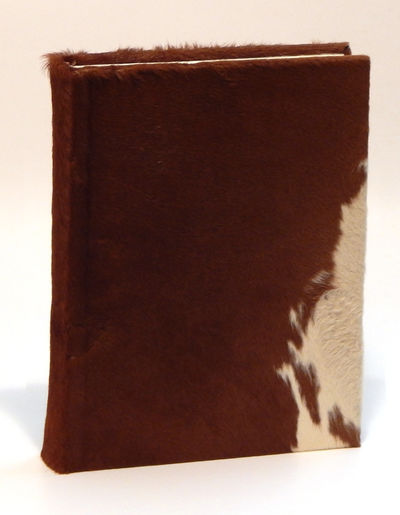 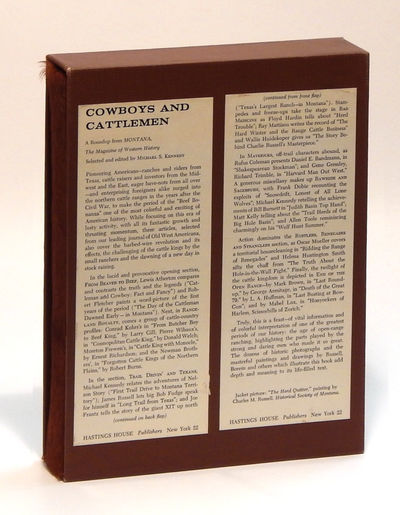 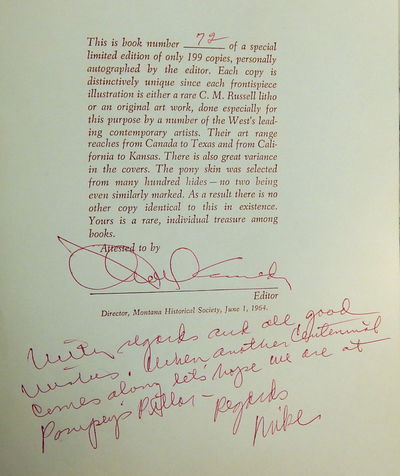 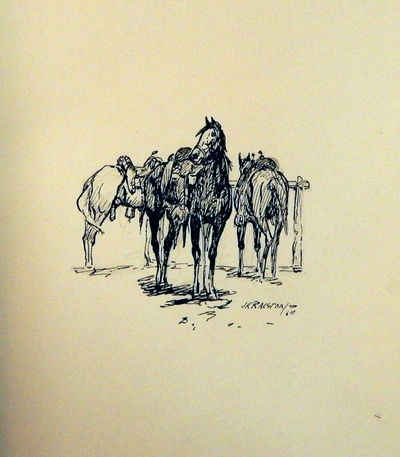 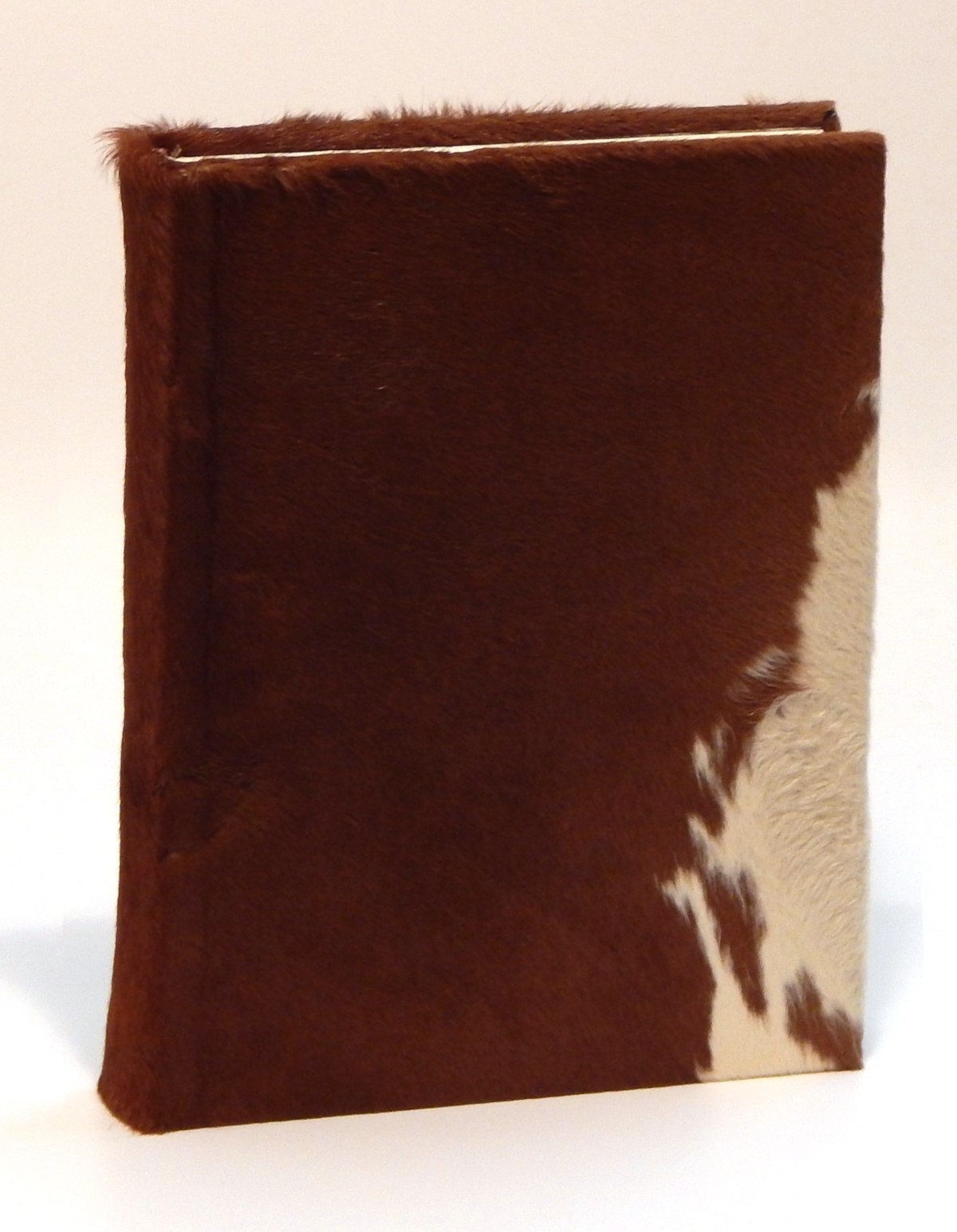 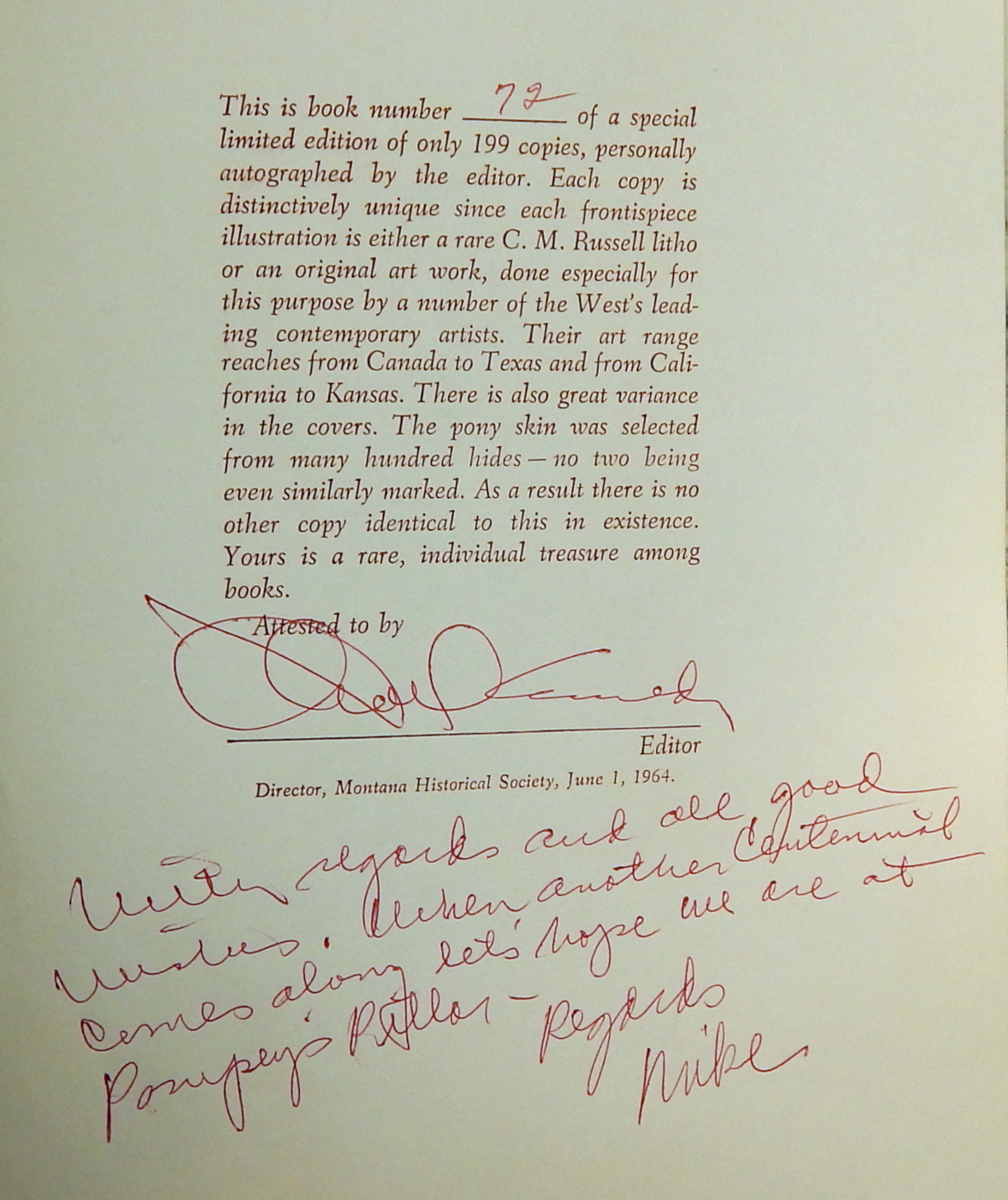 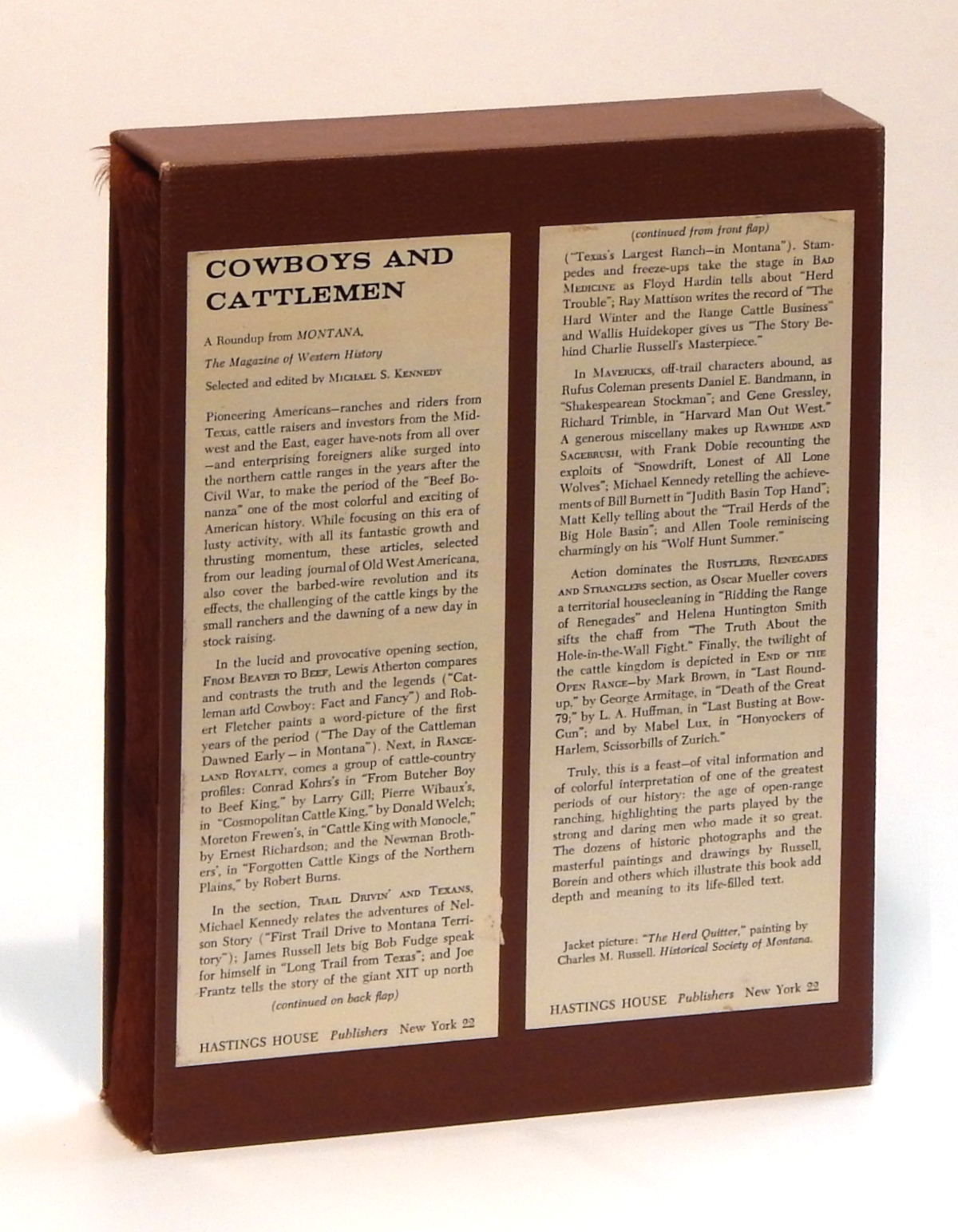 Cowboys and Cattlemen: A Roundup from Montana, The Magazine of Western History

Limited, signed edition. Quarto (27 cm), pp. [vi], vii-xii, [2], 3-364. Signed and inscribed by Kennedy on limitation page: "With regards and all good wishes. When another Centennial comes along let's hope we are at Pompey's Pillar. Regards, Mike." Number 72 of 199 copies. Brown and white pony skin covered boards, endpapers illustrated with Charles Russell painting. Brown slipcase with pictorial (Charles Russell) paste-down labels. Verso of frontispiece with pencil notation, "Don Foote 72" indicating the provenance of this particular copy: Don and Stella Foote were the owner's of Pompey's Pillar in eastern Montana. Now a National Monument, the 200-foot high sandstone outcropping that bears the 1806 carved signature of Captain William Clark of the Lewis and Clark Expedition. The pillar is named for Sacagawea's son, who was nicknamed Pompey. Very light rubbing and edge wear to slipcase, else fine.Each copy of this beautiful book is a unique creation, partly due to the varying patterns of pony hair covers, but more importantly: each copy has a frontispiece of either a Russell lithograph or an original work of art by various leading Western artists, in this case, an ink drawing of three horses by famed Western artist J.K. Ralston. Ralston was a Montana rancher who studied art in Chicago, then worked as a professional artist back in the West. He was awarded a Gold Medal by the National Cowboy Hall of Fame in 1978 and inducted in 2012.Illustrated throughout with black and white drawings and half-tone and gravure photographic images. Includes sections "From Beaver to Beef," "Rangeland Royalty," Trail Drivin' and Texans," "Bad Medicine," "Mavericks," Rustlers, Renegades and Straglers," Rawhide and Sagebrush" and "End of the Open Range" plus index. [ Adams, Six Guns 1233] First Edition.

Title: Cowboys and Cattlemen: A Roundup from Montana, The Magazine of Western History

Cowboys and Cattlemen: A Roundup from Montana, The Magazine of Western History