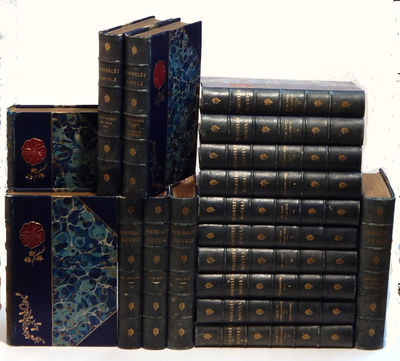 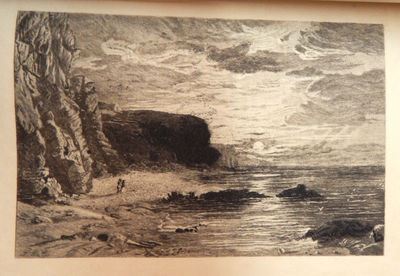 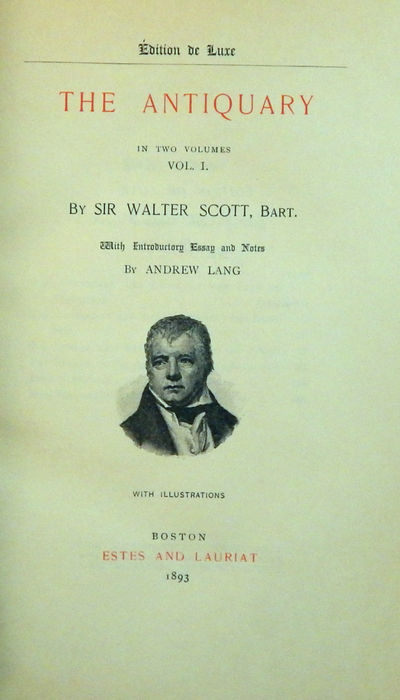 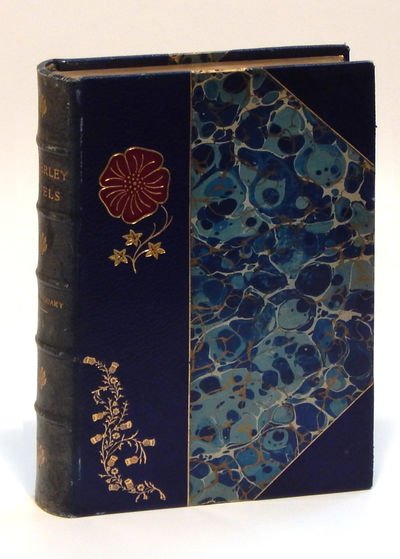 Octavo (23 cm). Twenty volumes of 48. Edition de Luxe limited to 1000 copies of which this partial set is number 290. Beautifully bound in blue half leather with gilt and red floral decorations, gilt spine titling and floral decorations, five raised bands, marbled boards and endpapers. Top edge gilt, other edges deckle. Frontispieces and several plates of etchings in each volume, with captioned tissue guards. "This copy has been printed and specially bound for Mrs. George Skofield" printed on front free endpaper of one of the volumes. Light edge wear and bumping, spines are faded. Bookplates of Thomas Jefferson Murray on inside front of each volume. Volumes included: The Antiquary (1), The Antiquary (2), Rob Roy (1), Rob Roy (2), The Bride of Lammermoor (1), The Bride of Lammermoor (2)/The Black Dwarf, The Monastery (1), The Monastery (2), The Abbot (1), The Abbot (2), Peveril of the Peak (1), Peveral of the Peak (2), St. Ronan's Well (1), St. Ronan's Well (2), The Talisman, Chronicles of the Canongate (The Two Drovers, My Aunt Margaret's Mirror, The Tapestried Chamber, Death of the Laird's Jock), The Fair Maid of Perth or St. Valentine's Day, Count Robert of Paris (1), and Count Robert of Paris (2)/The Surgeon's Daughter. "Scott's Waverley Novels, Edited by Andrew Lang | New Limited Edition of 1000 Copies | Sir Walter Scott has stamped his genius on an entire country and language, and by many is considered to stand first of all the world's great novelists. The Waverley Novels are read by millions, and in every civilized country in the world, but hitherto they have never been properly illustrated. This edition will be enriched at a cost of over $40,000, with proof impressions on imperial Japanese paper of 300 original etchings from paintings by celebrated artists, among whom are many members of the Royal Society for the promotion of Fine Arts in Scotland, and such masters as Sir J.E. Millais, R.A.R.W. Macbeth, R.A. Lockhart, Gordon Browne, Pettie, Lalauze, Lefort, Teyssonnieres, etc. It will be edited by Andrew Lange, the greatest English critic and bibliographer, who will furnish critical introductions, glossaries and notes to each novel, supplementing the author's own notes and prefaces. ... This is the most magnificent edition ever made of the works of any novelist. ..." (from the publisher's ad in The Literary World, January 1893). Will require additional postage.