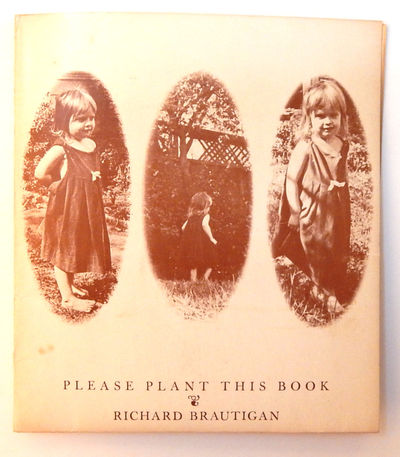 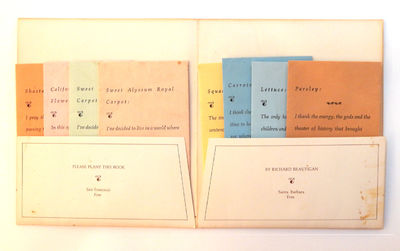 Limited edition of 1,500 to 5,000 copies. 16 x 18 cm cardstock folder containing eight differently-colored seed packets--four flowers, four vegetables--each with a Brautigan poem and planting instructions (packed for the 1968-1969 season). Folder is illustrated with three photos of a young girl, Caledonia Jahrmarkt, taken by Haight-Ashbury photographer Bill Brach.Six packets are unopened and still contain their seeds: parsley, lettuce, sweet alyssum royal carpet (x 2 -- one pink and one blue), carrots and squash. No seeds remain in the California native flowers and Shasta daisy packets. Originally contained only one sweet alyssum packet, and this copy is missing the calendula seed packet (Barber, 23).Laid-in is a folded, letter-size mimeographed broadside of the 1967 poem, "The Beautiful Poem," with "Drawing by Seurat" of a woman with a scarf. On the back is a handwritten notation of the address of Brautigan's early 1970s San Francisco apartment, 2546 Geary St. The poem was published in All Watched Over by Machines of Loving Grace and reprinted in The Pill versus The Springhill Mine Disaster. (Source: Brautigan.net).The glue has failed on folder sleeves, leaving brown discolored splots. Light toning and spotting to folder, and moderate soiling of some seed packets.According to biographer William Hjortsberg, the inspiration for the poetry seed packets was a discussion with friends about creating edible books to give away at a summer arts festival in Santa Barbara. The books did not happen, but Brautigan took the idea and ran with it. (Jubilee Hitchhiker, 316). First Edition.