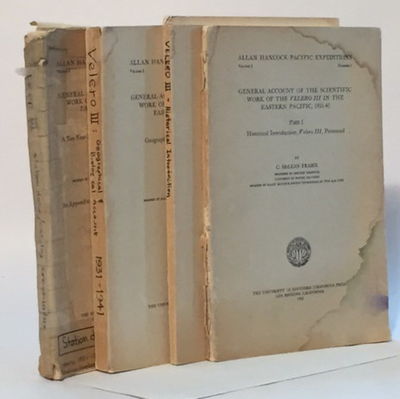 General Account of the Scientific Work of the Velero III in the Eastern Pacific, 1931-41 (Parts I, II & III)

Octavo (23.5 cm), pp. 48, 258, 431. Beige paper wrappers, charts, diagrams and black and white photos. Two copies of Vol 1 (Historical Introduction, Velero III, Personnel), both with water damage to wrappers. One has title handwritten on the spine and has uncut index laid in (pp. 433-445), the other is missing spine strip. Vol 2 (Geographical and Biological Associations, with Plates 17-128) also has dampstaining to wrappers, handwritten title on spine. Vol 3 (A Ten Year List of the Valero III Collecting Stations, with Charts 1-115), has handwritten title on spine, institutional writing on front cover, taped repairs. All volumes glued binding is failing.The third of four Veleros commissioned by Capt. George Allan Hancock for research purposes, the Velero III made some of the earliest expeditions to the Galapagos Islands (including one trip to investigate the mysterious deaths of settlers on Marchena Island. Its scientific mission ended when purchased by the Navy in 1941 for use in World War II (Chicago Tribune, Wikipedia). First Edition.

Title: General Account of the Scientific Work of the Velero III in the Eastern Pacific, 1931-41 (Parts I, II & III)

General Account of the Scientific Work of the Velero III in the Eastern Pacific, 1931-41 (Parts I, II & III)