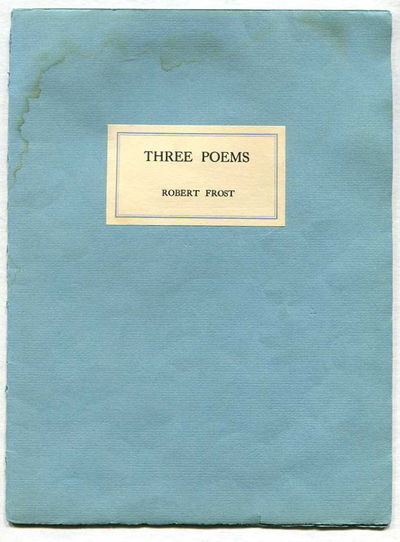 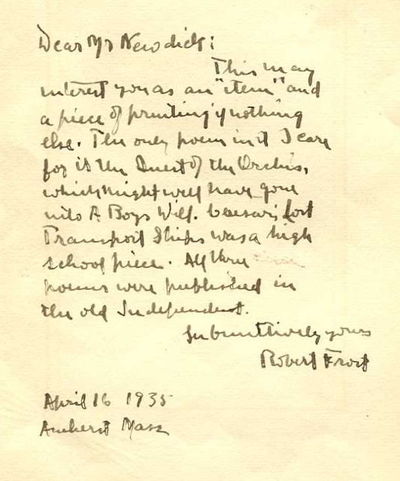 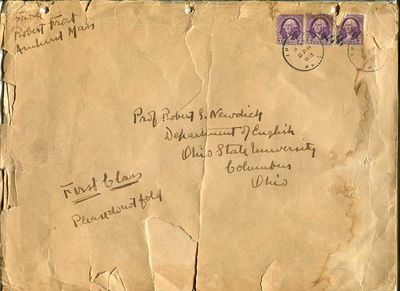 Quarto (25.5 cm), pp. [12]. Hand-tied pamphlet with blue paper wrappers, paper label. Signed with lengthy inscription (on verso of first leaf) by Frost to Robert S. Newdick, an Ohio State University professor of English literature (who was to have been Frost's biographer, but died before he could complete the work). No. 31 of 125, limited printing by the Daniel Oliver Associates of Dartmouth College. Includes three poems from Frost's early writing that had not previously been published in book form: "The Quest of the Orchis," "Warning," and "Caesar's Lost Transport Ships" (though all three had appeared in print previously in The Independent). Crane, A18.Front cover and back covers are detached from the rest of the pamphlet, and have dampstaining that does not affect the interior pages. Binding is intact but frail. Includes envelope addressed from Frost to Newdick in Frost's handwriting with cancelled three-cent stamps and the admonition to postal carriers: "Please do not fold." Envelope is in two pieces, has dampstaining and many chips and tears. Inscription reads: "Dear Mr. Newdick, This may interest you as an 'item' and a piece of writing if nothing else. The only poem in it I care for is The Quest of the Orchis, which might well have gone into A Boy's Will. Caesar's Lost Transport Ships was a high school piece. All three poems were published in the old Independent. [indecipherable] yours, Robert Frost April 16, 1935 Amherst Mass." First Edition.