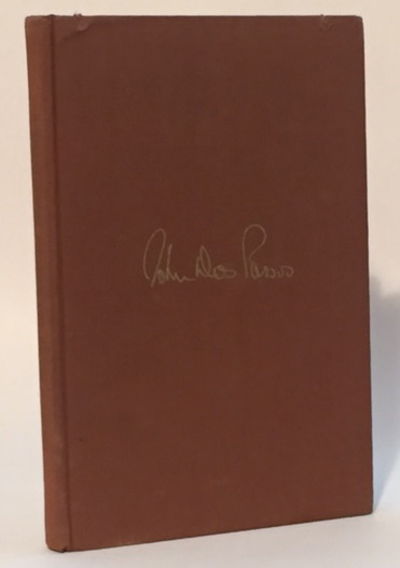 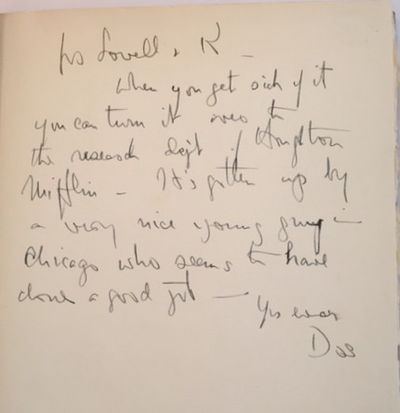 A Bibliography of John Dos Passos

Octavo (23 cm), pp. 94, [2]. Signed and inscribed by Dos Passos to his editor at Lovell Thompson on free front endpaper: "For Lovell & K- When you get sick of it you can turn it over to the research dep't of Houghton Mifflin - it's gotten up by a very nice young guy in Chicago who seems to have done a good job. Yrs ever, Dos." Limited edition (#12/365). Brown cloth with gilt spine titling and Dos Passos facsimile signature on upper board, deckle edge. Includes Addenda of periodical articles tipped in on recto of final leaf. Boards have mostly light edge and corner wear and some rubbing, with two indentations at top of upper board. Glue from Addenda has bled through onto verso of final leaf.A unique association copy. Dos Passos was called "Dos" by his friends, and often signed books to them in this manner. Thompson, who was head of HM's trade division for most of the 42 years he spent there, was called a "brilliant conceptualizer" by his colleagues upon his passing. In addition to Dos Passos, he worked with Bernard DeVoto, Anya Seton, John Kenneth Galbraith, and Andrew and Betsy Wyeth. In his introduction to this volume, Dos Passos reflects that "It's hard to imagine what anybody could possibly say to introduce a volume of bibliography ... listing his own works. It's like asking a man to engrave the plate on his coffin after he's been laid away in it by the undertaker." First Edition.

A Bibliography of John Dos Passos