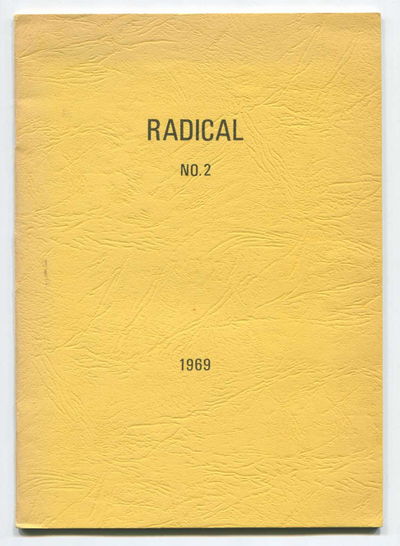 Radical: A Journal of Radical Thought and Expression, No. 2

Octavo (23 cm), pp. 27. Bright yellow wrappers with black lettering, staplebound. Includes articles on Ideology (G. Siann), Industrialization, Race Relations and the Future of South Africa (R. Kaplinsky), The University and Cultural Criticism (P. Gaffley), Social Change (T. Bredenkamp), and The Impoverishment of Latin America (Juan Bosch). Wrappers have sun damage around edges. Radical was the publication of the Radical Students' Society at the University of Cape Town in South Africa. According to an article on South African History Online ("Conservative Revolutionaries: 'Anti-Apartheid Activism at the University of Cape Town 1963-1973'), the group was formed in 1967 by Raiph Kaplinsky, who while being mainly a Marxist intellectual, nonetheless instigated a sit-in during the spring of 1968 involving hundreds of students and lasting nine days. One of the contributors, Juan Bosch, later became the first democratically-elected president of the Dominican Republic.

Title: Radical: A Journal of Radical Thought and Expression, No. 2

Radical: A Journal of Radical Thought and Expression, No. 2